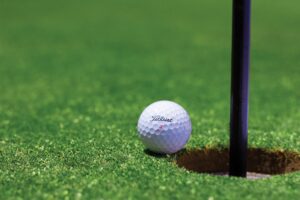 Do you ever step back and consider how long you hold on—when you know deep down it’s time to let go? Is it possible that you resist so long that it holds you back from reaching what you want?

On Sunday, I watched an incredible demonstration of what looked to be certain loss, followed by creative thinking, resilience, and victory that still has the golf world buzzing. Jordan Speith hit an errant tee-shot with just six holes left to play at the British Open. He was tied for the lead with fellow American, Matt Kuchar. His ball was buried in tall grass “on a dune so steep he could hardly stand up, let alone take a swing.” It seemed his only option was to take a one-shot penalty, which would put him behind for the first time all weekend. It looked bleak, like he blew it.

But instead of getting caught up in how badly he has screwed up or starting to mentally stress and letting his fear of losing dominate his thoughts, he got creative, and asked if the driving range was out of bounds, it wasn’t. He played his next shot from there (after nearly twenty minutes of contemplating his options) and finished the hole with a bogey one shot behind. (Without using this strategy he could have easily been two to three shots behind.)

I’ll admit I was thinking he may have just thrown away the tournament and that Matt had a chance to win his first major event. But the next hole, Jordan hit an amazing shot and landed his ball within inches of the cup, so close that he tapped in for birdie. And now, he was again tied with Matt with four holes to play. It was an incredible display of directing his mind toward what he wanted, (a good shot) and not giving thought to what he didn’t want (losing the tournament).

This is one of the things that makes me love watching golf and tennis, resilience. Letting go of what just happened and focusing on where you are now, the next shot. Rafa Nadal (pro tennis player) is excellent at it, Tiger Woods, always impressed me with his resilience, moving beyond a mistake and making up for it on the next shot. It’s a mark of a true champion, and a great leader; the mindset of a winner makes the choice to let go and move on…quickly.

It’s easy to observe it watching sports, but can you spot it in your own life? When something happens and you feel you blew it—or someone did something to you, do you show resilience and let it go quickly?

Do you make the conscious choice to move on or do you hash it over and over in your brain, beating yourself up and agonizing over it for days and months. Is it the story you tell you friends, how you were “wronged” for days, months and years after? You never do “x” any more because of the time…

I hear this kind of talk when I’m getting my hair done. Thank goodness for the noise from the hair dryers to drown some of it out! Everyone complains on and on about their girlfriend, or their in-laws, or their kids. It’s like chewing gum too long—time to throw it out and let it go.

No matter how much thought, analysis, insomnia and energy you invest, you cannot change what has already happened. Opportunity lies in this moment and planning for the next one. And that brings a calmness of mind.

How do you let it go? People ask, clients ask and they tell me they couldn’t possibly ‘just let it go.’ There is a perception that it has to be hard. But it is merely a choice. You are not your thoughts, you have a choice what to think and where you focus your thoughts (focus = what you think about more than anything else, where you put your energy). On Sunday, Jordan Speith chose to focus on winning his third major tournament instead of starting to worry about losing it. He won.

Where is your focus today? What are you holding on to? What story are you repeating over and over, is it one that makes you feel good? What could happen in your life, if you chose to let go of what happened and move on to the next shot? I’ll bet you could be a lot happier, you would sleep better and I guarantee you, that you would significantly reduce stress and have more energy.

Are you ready? It’s time to let go!