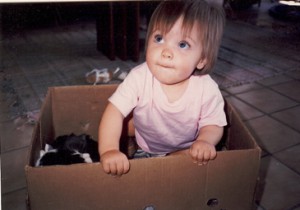 So what’s it like where you live? Do you, or have you spent time in a box? You know, those limitations put on us by other people…and more importantly by ourselves.

I’ve spent a great deal of my life in a box starting with a very controlled upbringing. Religious pressure and control and pressure to study music, when all I really wanted to do as a young girl was be a tennis player like Chrissie Evert. Along with my feelings of “I just don’t fit anywhere,” as I got into high school and college the box changed, but I remained in a box.

As I entered my teens, the box became my own insecurities and running to hide in the safety of food and alcohol (yes, as a teen). And still there was the reigning religious pressure that if I didn’t do things “right” I would go to hell. (No, I wasn’t raised Catholic.)

Part of the issue is, we get so used to being in the box that it actually becomes comfortable, even though we hate it. It is after all, what we know. Being free, being outside the box isn’t something we’re used to, so we stay in the confines of what feels familiar.

After college, I found and moved into yet another box: being a corporate employee. This box was full of “shoulds, musts, cants and being politically correct” which I hated. I’m not and have never been a game player  and the corporate experience was full of games, dishonesty and pressure to act, or perform in the “right” way. Always made me more rebellious.

Over time it wears you down. That constant pressure to stay in the box, do the right thing and not explore what’s outside. At least it did me. Of course in combination with my box I always had food and alcohol to binge on. And God bless the corporate sales role, I got to take clients out and was able to numb out right there with them over appetizers and drinks, while being socially acceptable!

I’ve spent a great deal of my life studying, searching and reaching higher every day to improve my self-esteem and my skills. As I grew older I set my intention to be myself and fulfill my life’s purpose. It took till I was 47 years old to even connect with what my purpose was. Then it took another two-three years to begin to pursue it full-time. Ah….freedom.

But wait, as a business owner just getting started there is another new box waiting for you. It’s called financial fear aka unknowns. This box is packed with lots of things that encourage you to question yourself and wonder if you really know what they hell you’re doing in the beginning.

But the eternal optimist, I continued forward because that’s what I do regardless of the box I’m in. And just like the haystack, where there’s got to be a pony—I knew there was success waiting for me in the business owner box. But recently I realized that I’m still living my life, inside of a box and decided I want out. 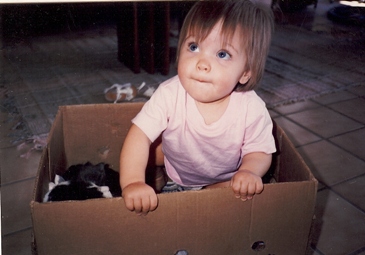 My niece Lace, crawling out of her box as a young-un.

I no longer want to be tied to any beliefs that don’t support me. I don’t want people in my life that don’t or can’t support me and bring me down with their focus on negativity and all that’s “wrong” in their life. I set my intentions for what I want to create in my life, how I want to help people and how I want to spend my free time. Then I put my attraction magnet to work out there in the Universe. I expect only the best outcomes, because I deserve to be healthy, happy and inspire other people to improve their quality of life through example of how I live mine.

Sometimes things don’t show up when I want them, but they show up when I need them. Each day I’m shifting my thought processes and beliefs even farther than I dared to dream before, because I know there is more to life than living in a box.

“Life begins at the end of your comfort zone.” Neale Donald Walsch