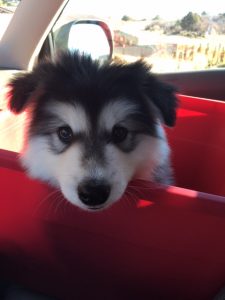 Hi – I didn’t fall off the planet after all! I’m back with energy to share with, inspire and encourage you.

This week I’ve been reflecting on the memory that one year ago this weekend, we had our Revitalize Your SELF (RYS) Retreat. We had NO idea that the next week the gauntlet wound land and everything would be shut down. Such a shock to the system and so many unknowns in that first 30 days!

You may remember that I brought home a new puppy on Halloween? My dear sweet Kanook is six months old today and now weighs 73 pounds. He is amazingly handsome and captures the attention of all who see him, including the neighborhood dogs

The journey with Kanook has not been what I anticipated, and nothing like I’ve ever experienced with a puppy before. It wasn’t full of love and joy (and you know how much I love my dogs). It was challenging for Kiska at 12 years old, challenging for Kanook to be in a crate and exhausting for me. I had nothing in the tank but frustration coupled with “what am I doing wrong?”

I engaged the trainer that did so well with Niko and Kiska – wrong approach! That only increased the issues I had with Kanook biting and as he got bigger lunging and biting me on walks (and OMG embarrassing!). I paid a ton of money for sessions with an animal healer and communicator, and that helped me understand how to let go of my fear, get and stay grounded and communicate with him visually.

Let me just say that visualizing what you want your dog to do before your give the command, or even in place of a verbal command is an astounding way to get immediate feedback. (If you want to know more, send me a note.)

Two weeks ago I woke suddenly with tears in my eyes as I realized Kanook didn’t want to be an indoor dog, he hated being in the crate while I worked (HOA wouldn’t allow me to put in a dog run) and Kiska was too old for all of this energy. She was getting very little attention from me. And me? Well, I was a mess, totally exhausted and fighting the guilt of why I got him.

But get this….the week before this realization hit me I realized I hadn’t told a good friend of mine who has a Great Pyrenees about Kanook. I sent him a text, and his response was, “He’s cute, can I have him?” I said, “Last week I would have said, yes.” He said, “And I would have come and gotten him.” SERIOUS!

Tiger (the Pyrenees) lives outside ‘cos he has this drool and slobber thing going on. So I reached out to this friend…long story short, Kanook and Tiger now have a budding bromance! He lives outside vs in a crate, he’s exhausted and sleeps longer than he ever did here and he has the masculine energy of my friend that I think he craved.

Kiska is so incredibly happy! She has blossomed back into some amazing energy. And me? I’ve actually gotten some sleep and found the energy and inspiration for the things I want to share this year and the BIG, BADASS goals I plan to reach. Whew! Everyone is happy, it turned out for the best.

Painful? You bet!
Difficult? Hell yeah…
But Kanook laid a couple of big lessons on me about leadership and letting go of fear.

He stopped by for 3.5 months for a reason.

Painful situations will pull you forward if you let them, if you’re open and willing to look inside for the lesson and path forward.
The last photo of Kiska and Kanook together, he is on the right.