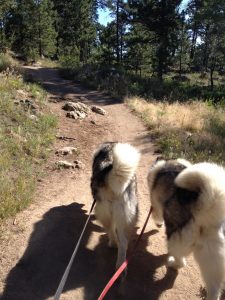 Yesterday I took the dogs up to the foothills for a little warm up hike. Since I’ve only had them a few months I didn’t know if they had ever hiked before and I was excited to share the experience with them. I started out on a trail I’ve done a number of times with my other dogs and they were in dog heaven (not be confused with hog heaven)!

We were enjoying the early morning sun, the fresh smell of the evergreens and the big beautiful Colorado sky. Niko and Kiska were having a sniff fest enjoying all the new smells the mountain had to offer. Right as we parked we saw a family of deer run across the road in front of us—we had escaped the city.

About 30 minutes up the trail we encountered a group with two families, little kids and a black lab. After the training sessions we did, Niko is much better socialized than he was, but is still a bit unpredictable around other dogs in close quarters. I stepped aside to let them pass and Niko and the lab had a few macho things to say to each other. So I quickly moved around them and headed up to the right.

Within ten minutes I realized this was not the trail I wanted to be on. In my haste to get around the other people I had turned off on another trail which was longer. With this being their first experience hiking I didn’t want to overdo it.

We turned around and headed back down the trail. But within another twenty minutes where I was didn’t look right either. The dogs were pulling me to keep going in that direction, but I was unsure as my map had fallen out of my pocket. By now Kiska is hot and ready to end this journey.

We came on a trail sign that said the trail we were on went both ways, I thought we were going the wrong way, so I attempted to turn back, but the Kiska laid down and basically refused to turn around. We turned back and within a few minutes saw some people that confirmed that the dogs were right, the parking lot was the other direction.

When we reached the trail sign the second time, it was only about five steps ahead that I could see the parking lot was right there. I had to laugh as I should have trusted the dogs in the first place. Their sense of smell is so much stronger than ours.

My concern for not getting the dogs overheated made my ability to navigate a simple situation difficult. I had feedback right there in front of my and I doubted it. And just like my blog about Beatrice the bunny, had I gone just a few steps farther I would have been where I wanted to go a good thirty minutes earlier.

Life lesson, be alert to and listen to the guidance you’re getting and you’ll reach your destination much more directly!

Home » Blog » Do You Listen to Guidance?