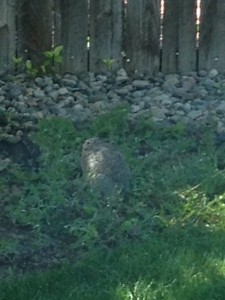 Meet my friend Beatrice the Bunny. Ever since my dog Sasha passed away last year Beatrice has had the run of the yard. As I looked out the kitchen window early this morning I noticed how content she was nibbling away at some weeds and then—it happened, the sprinklers came on right where she was eating. She froze. She put her ears back and went into defensive mode.

I called out to her, “Those sprinklers are going to be on for twelve minutes, you might want to move!” But there she sat, hunkered down and prepared to ride out the storm. I returned to the window five minutes later, Beatrice was still weathering the storm. I returned out of intense curiosity a third time and she was dripping wet as she was only twenty inches from the sprinkler head.

As I surveyed the situation, I saw that poor Beatrice sat there frozen for twelve minutes getting soaked, when all she had to do is hop to the left one foot, or even hop forward one foot and she would have been out of the pounding storm that was disrupting her morning meal.

I waited until the sprinklers shut off to see how she would respond. The sprinklers off she remained frozen, waiting.  Was it safe? Was it really over now? After about 45 seconds, she perked up her ears, moved her head and hopped over an inch to eat again drenched in the water she took on from the storm.

The message hit me so profoundly. How many times in life do you brace yourself for the storm convinced there is nothing you can do but wait it out? How many times have you taken the pounding by a circumstance that hurt like hell and left you cold and hungry like Beatrice did? How many times did you suffer unnecessarily of your own doing because you perceived there was nowhere to go and nothing you could do?

People get stuck in these patterns thinking (via auto pilot) that the best offense when a life storm hits is to freeze. You hunker down, maybe get depressed, eat too much, cry about why, why, why this is happening to you again and wait for the storm to pass. You figure if you keep a low profile it won’t hurt that bad…or perhaps you think you deserve it because nothing works out the way you want it to. And because your first response was fear—you got stuck.

What you missed in the process was seeing that the way to calm the storm was right there in front of you. To reach it you just needed to take action and look for the solution instead of buying into the circumstance of the storm.

Next time you feel your life is a hurricane or hail storm, open your heart, your eyes and ears. Empower yourself to be courageous and move out of the eye of the storm.

Home » Blog » Do You Freeze and Wait for the Storm to Blow Over?