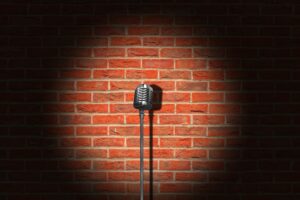 I’m reading Martin Short’s book, “I Must Say,” and he shares such a wonderful example of putting the intention out there of what you want in life. As a young boy he was totally taken with Frank Sinatra. He used to sing Frank’s songs up in his attic bedroom along with the records. Then he began to create his own vaudeville show and taped in, there in his bedroom. This was all done when he was in grade school! He announced himself as the show’s host, sang songs, interviewed himself as different people (Katherine Hepburn and more) and created the whole show right there in his room.

The part that really warms my heart is that his mother, who was a concert violinist would then give him reviews on his songs and performances. She rated him with things like, “Great performance or this one needs a little work,” and so on. No one made fun of him for being into Frank when rock n’ roll was the new hot thing. In short (pun intended) he created his future right there in his bedroom as a young boy.

Marty says at that age he really didn’t have an intention to be in show business when he grew up, but he made it real. And that’s what counts. That’s how you feel an experience you want to have and bring it into your reality.

I’ve spoken and written a great deal about this, and his books painted such a wonderful picture of how to create the scenario of “being in the experience.” You cannot bring something new into your life that you’re unfamiliar with, without experiencing it and making it real. And you certainly cannot enjoy something you want to experience when all your thoughts are shrouded in all the reason it will never happen.

My new house is a perfect fit in so many ways and totally in sync with the house I kept visualizing as I was looking for a new place to live. If I had bought into the fear that so many people/realtors were spreading about how difficult it is to find a rental here in Denver I would not be in this house and would be living at the mercy of negative circumstances I bought into. I don’t live that way, it doesn’t compute in my brain. My mind functions like the Monty Python song, “Always look on the bright side of life.”

If you’re goal is to lose weight, find a photo of yourself when you looked the way you want to look now and post it in your bathroom where you’ll see it every day. Or if you need more inspiration, find a photo of someone (with a build like yours!) whose photo will give you inspiration. If you want to buy a new car, go drive it—even if you can’t buy it for 6-12 months. Go drive it, experience the ride, pick out your color and make it REAL.

I’m going to the US Open Tennis Tournament in New York in two weeks. I’ve had photos of the Arthur Ashe Stadium and a tennis ball that has “US Open” printed on it on my vision board for five years. And now I’m finally going! I’ve visualized the experience of being there many a morning after my meditation, I’m on the grounds at Flushing Meadows, I’m talking to the people seated next to me and I’m watching Rafa Nadal play.

In addition to having fun with your imagination, think about all of the positive energy you’re bringing into your life when you create things. What is it you want to happen next in your life? It’s only as far away as your imagination and intention to have it. Believe in your ability to create it, and remember, ANYTHING is possible!

Home » Blog » Do you CREATE your future?