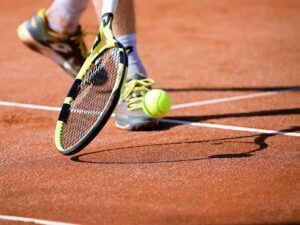 I find inspiration everywhere. My eyes are always open, looking for something that gives me a boost forward. At times, the way inspiration shows up is consistent, where I’d expect it, and other times it just blows me away.

As I’ve watched the US Open this past weekend, it brings back wonderful memories of being there two years ago. What a wonderful trip it was, because it was the realization of a goal I’d set five years before…but I digress.

I love the game because it is such a raw display of the human mind and how critical mindset is to your success and happiness in life. All the things I’ve shared with you over the years about how your thoughts become things, how what you focus on and think about becomes your reality—it happens over and over at a tennis tournament.

Watch the player who is losing, as his shoulders slump, his body language says “I’ve given up,” he starts mumbling to himself, or worse yet, throws a racquet in a temper tantrum. This rarely leads to the turnaround of a winning score.

But when the losing player stages the comeback, I’m mesmerized. Yesterday’s story was amazing—crazy, extraordinary. Juan Martin Del Potro hardly looked like himself as he lost the first set 1-6. The commentators said rumor was he’d had a virus the past couple of days.

The start of the second set didn’t look any better. No energy, no spark and the commentators thought he might”retire” (aka quit the match) he looked so bad.

But Del Potro continued, and won the third set 6-1, shocking his opponent (D. Thiem). The fourth set turned competitive. He won it in a tie-break despite facing two match points by his opponent. The New York crowd was screaming for him and encouraging him to push harder.

And persist he did. He kept focused on only the next point he had to play, until it was, game, set, match, Del Potro wins!!

I’d been thinking recently that I blew it on an opportunity, that there wasn’t enough time to finish it and get the results I wanted. But this display of resilience refueled my tank, inspired me to push on and reminded that even when you start out weak, you can finish STRONG. Never, ever give up, until you’re out of time or the game is over.

The big “AHA” I got yesterday after watching tennis for years is to literally apply that “tennis mindset” to my business, to react like a tennis player does when losing a game or a set. To stay calm and play the next point, to do my absolute best to serve, support and inspire my clients.

When you believe in yourself, you can do anything you set your mind to. Stay in the moment, stay focused and expect to win.